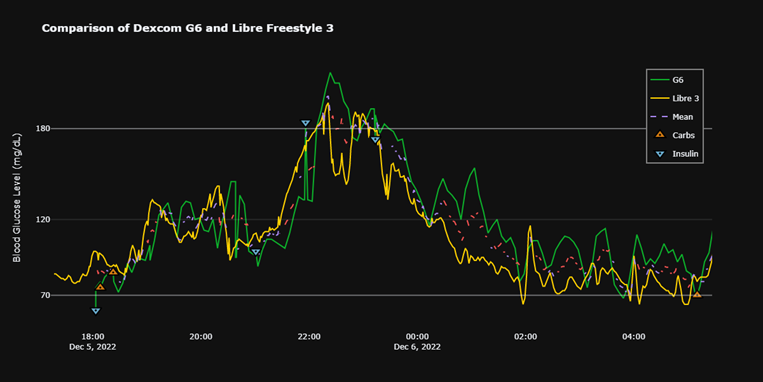 A subjective comparison of two of the best continuous glucose monitors (CGMs) for Type 1 Diabetes management.

I recently had the chance to test out a Freestyle Libre 3 continuous glucose monitor (CGM). I’m a type 1 diabetic and I’ve been wearing the Dexcom G6 for a few years now. I figured this would be a good excuse to compare the two and see if I was missing out on anything. What follows is my subjective experience with the two sensors. I try to give an accurate and honest review of each of them, and highlight their pros and cons.

This post is not meant to be an exhaustive statistical analysis of the accuracy of these sensors. If that’s what you’re looking for, you can find a number of legitimate studies on the internet that do a much better job of that than I can. Alternatively, you can look for the MARD values of each of the sensors, which are evaluated by the US Food and Drug Administration.

Before we get started, let me share some details about how I conducted this little experiment. These are some of the assumptions, background information, setup details, etc. that I believe should be stated up front for clarity:

With that out of the way, let’s get into the data itself.

In the image below there are two CGM traces – green for the G6 and yellow for the Libre 3.

The purple dashed line in the middle represents the simple average of the two readings at any given point in time. You may notice that the purple dashed line is, uh, red in a lot of places. I colored it red when the difference in readings between the G6 and the Libre 3 exceeded 20%. This percentage was chosen somewhat arbitrarily.

Warming Up The Sensors

The first thing I looked at after gathering the dataset was the start of both sensors. We all know from experience that these CGMs tend to have high variability after they first come online, usually for 24 hours or so.

This is shown in Figure 2 above. We can see that the Libre 3 came online first (due to its shorter warmup period). From visual inspection alone we can say that variability in BGL readings was relatively high for both sensors based on how jagged the lines are.

Contrast that with Figure 3 below which shows the sensor readings 24 hours after startup.

The sensors have considerably less variability here, with the G6 looking particularly smooth. Remember, though, that the G6 is reporting a reading only once every 5 minutes. Naturally, this will result in a smoother trace.

Change in Variability Over Time

Variability of the sensor data seems to decrease over time. This is something that I and many others experience subjectively, but can we demonstrate this in a more quantitative manner?

If the reading variability reduces over time, it makes sense that the two sensors should “converge” and agree with each other more often as time progresses. To test this hypothesis, I created a time-series histogram that shows the sum of the absolute difference in reading values from the two sensors over time.

What Figure 4 shows is that the sensors did not agree very much at the beginning of the period. Over time, though, they reached a sort of equilibrium. (Note again that I lost data from the Libre 3 for about 24 hours in the middle of the test, which resulted in the lack of data on December 9th.)

In total, I found that the sensors were in agreement (within 20% of each other) about 88% of the time.

Like I said before, I’m not here to make any claims about the accuracy of either device. They both worked satisfactorily for my purposes, as a Type 1 diabetic of over 14 years. What I’ll discuss now is my subjective experience with both, and why I ultimately decided to stick with the G6 over the Libre 3.

From a data perspective, the Libre 3 and Dexcom G6 both work great. I didn’t have any significant issues with, for instance, readings being out of range compared to my finger prick values. The Libre 3 has a much better form factor and size, but that won’t be as much of an advantage when the G7 becomes fully available, since the G7 is more comparable in size.

For now, I’ve decided to keep using the G6. The Libre 3 is a great device but has terrible alarm configuration, which makes the G6 the winner of this experiment. Regardless of which one you decide to use, they both work great with Gluroo for logging all things related to diabetes management.

You can learn more about Gluroo or download it today for free.

2 thoughts on “Dexcom G6 vs. Freestyle Libre 3: Which CGM is Better For You?”